The alarm went off at 5 but I was already half awake listening to the birds singing. 10 minutes later I was dressed in my riding clothes and eating breakfast: a banana, of course. Downstairs I located a couple of staff members in the lobby and requested a coffee in broken Italian. By 6 we had retrieved our bikes, mounted our bags and stowed our auxiliaries in the car. Now it was time for the ride to begin! First we headed through Ascona to the lake shore and went down to touch the water. If we were going to do this, it was going to be done right, and that meant going, quite literally, from the water line. 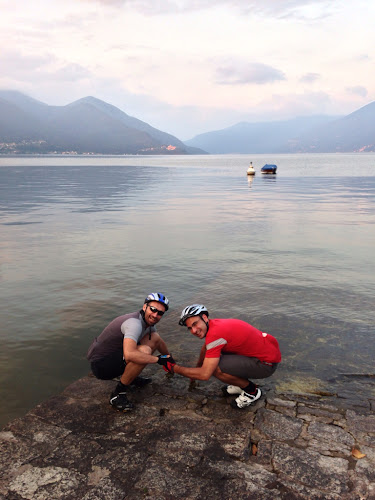 Then we retraced our steps and made our way toward Bellinzona. The chill morning air was a perfect temperature, I wore a vest over my jersey and on my lower half, just riding shorts. The first hour to Bellinzona was done at a leisurly pace and my heartrate rarely exceeded 110. Just before 8.00 we stopped for a quick coffee and croissant at a cafe and bought some sandwich fixings which we would later have for lunch. 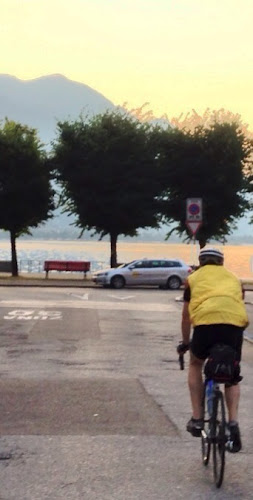 Then it was onward and upward. We maintained a column while riding so the second and third riders could always sit in the slipstream of the first, each of us took 5-10 minutes at the front before trading. This way we really made good headway. 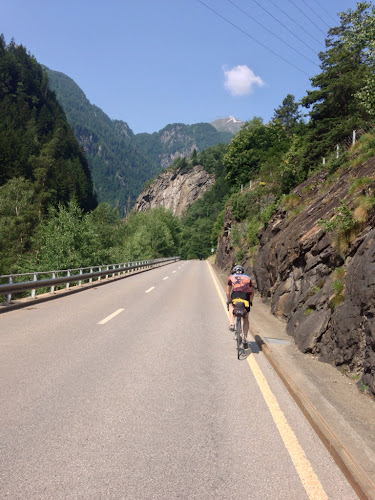 Just before Airolo, our lunch spot, I noticed my right-side pedal felt a bit loose. A few minutes later its spring snapped. It's funny how this sort of thing generally waits until the start of a trip like this before happening. One in Airolo, Beppe and Alessio found a picknick spot while I went into the town's only bike business -which dealt in rentals only – and hoped they could help me out. It's not as though the mechanic didn't want to help me, but he was somehow pretty useless nevertheless. He had dozens of pedals, but none like the ones I had. What was even odder is that for all the pedals he had, he didn't have a single cleat to speak of, which clip pedals are all but useless without. Frustratingly, he seemed convinced he didn't have any cleats without even making the most cursory of searches. I asked about three times if he was sure and kept peering into his various bins of spare parts hoping I would catch a glimpse of something resembling a cleart, but unfortunately with no luck. In the end I bought his cheapest pair of conventionl pedals for CHF 15, and asked him to only mount the right-hand one- I'd keep my one still-functioning pedal on the bike. He then proceeded to remove the good pedal first before I repeated the request I had just made only moments before. As I said, a bit useless, but maybe not his fault – I was probably just pissed off more than anything. 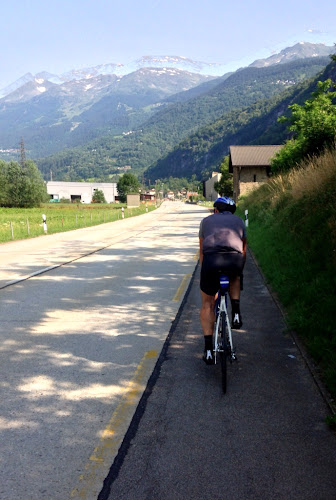 I rejoined the others on some steps by the train station and scarfed down a couple of sandwiches before heading across the street to a Denner for an apple, bannana and bottle of coke. 30 minutes later, after reapplying sunscreen, we began the second leg of our day's journey: the remaining 24 kilometers and 1300m of climbing to Nufenen Pass.

The day had become hot and shade scarce. I was dripping sweat in no time. The sun beat down on our backs as we slowly turned the pedals. It's a rare state of mind one enters while cycling. The exertion is relentless, the moment you let up on the pedals you immediately lose momentum. You distract yourself with the stunning scenery, with music, with watching the mesmerizing motion of the pavement passing under your wheels. You become fascinated with watching your own shadow morph rhythmically, the passing flowers, passing gurgling streams. 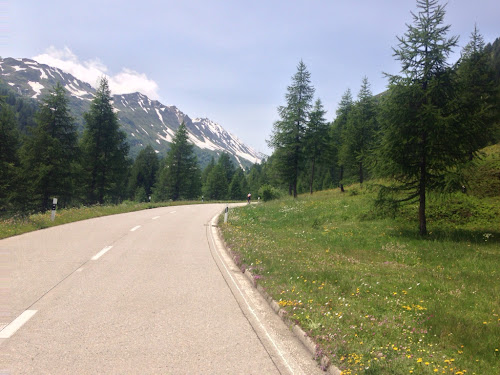 Soon we rounded a bend and could see the pass, still mostly snow-covered, rising in the distance. Little flickers of light, the sun reflecting off motorists, could be seen among the glistening fields of old snow. It was still a ways to go. Another corner, another straightaway, burning muscles, dripping sweat, the refreshment of a brief gust of wind. 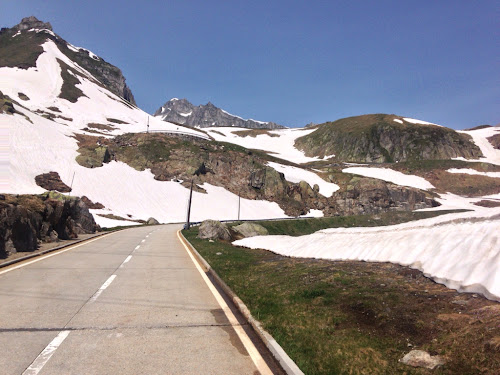 I dug out a mangled, partilly melted granola bar, tore the wrapper off with my teeth and stuffed it in my face. The grade steepend, I ran out of easier gears, and sat up for more torque. At 14.07 I rounded the last bend and passed the sticker littered Nufenen Pass sign. 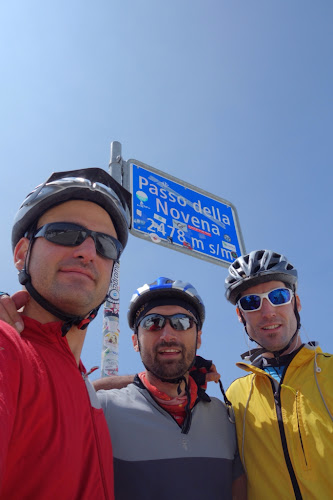 We had started the day at 199m and here I was 107 kms later at 2478m. We had passed from the lushness of mid-summer back to a snow-covered alpine landscape. 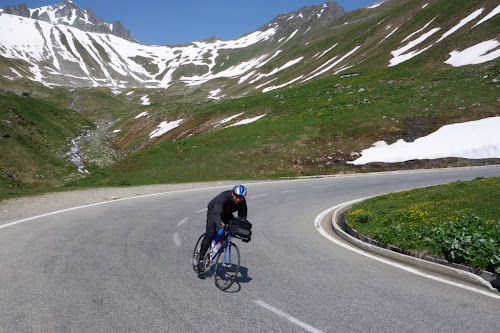 In two days we will ascend much higher, of course, up to the endless winter. It is going to be amazing. As Tessin is a region I used to frequent for climbing while we were living closer by in the adjacent canton URI, today was a revisit to familiar ground. Tomorrow will be a journey into the unknown for me as I have never been beyond Visp – but don't tell anyone, I think that might be a punishable offence after 10 years' residence in Switzerland!!!

Special thanks to our sponsors and partners